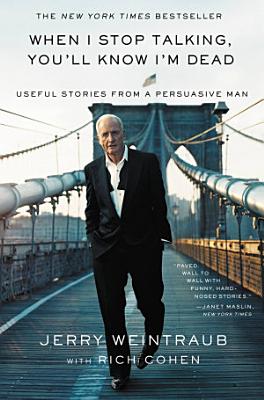 Here is the story of Jerry Weintraub: the self-made, Brooklyn-born, Bronx-raised impresario, Hollywood producer, legendary deal maker, and friend of politicians and stars. No matter where nature has placed him--the club rooms of Brooklyn, the Mafia dives of New York's Lower East Side, the wilds of Alaska, or the hills of Hollywood--he has found a way to put on a show and sell tickets at the door. "All life was a theater and I wanted to put it up on a stage," he writes. "I wanted to set the world under a marquee that read: 'Jerry Weintraub Presents.'" In When I Stop Talking, You'll Know I'm Dead, we follow Weintraub from his first great success at age twenty-six with Elvis Presley, whom he took on the road with the help of Colonel Tom Parker; to the immortal days with Sinatra and Rat Pack glory; to his crowning hits as a movie producer, starting with Robert Altman and Nashville, continuing with Oh, God!, The Karate Kid movies, and Diner, among others, and summiting with Steven Soderbergh and Ocean's Eleven, Twelve, and Thirteen. Along the way, we'll watch as Jerry moves from the poker tables of Palm Springs (the games went on for days), to the power rooms of Hollywood, to the halls of the White House, to Red Square in Moscow and the Great Palace in Beijing-all the while counseling potentates, poets, and kings, with clients and confidants like George Clooney, Bruce Willis, George H. W. Bush, Armand Hammer, Brad Pitt, Matt Damon, Bob Dylan, Led Zeppelin, John Denver, Bobby Fischer . . .well, the list goes on forever. And of course, the story is not yet over . . .as the old-timers say, "The best is yet to come." As Weintraub says, "When I stop talking, you'll know I'm dead." With wit, wisdom, and the cool confidence that has colored his remarkable career, Jerry chronicles a quintessentially American journey, one marked by luck, love, and improvisation. The stories he tells and the lessons we learn are essential, not just for those who love movies and music, but for businessmen, entrepreneurs, artists . . . everyone.

Alex and the Amazing Time Machine

Authors: Rich Cohen
Categories: Juvenile Fiction
Alex Trumble is a pretty ordinary kid—except for the fact that his IQ borders on genius, and he loves to read books on vortexes and time travel. But when two

The Sun & the Moon & the Rolling Stones

Authors: Rich Cohen
Categories: Biography & Autobiography
Rich Cohen enters the Stones epic as a young journalist on the road with the band and quickly falls under their sway - privy to the jokes, the camaraderie, the

The Fish That Ate the Whale

Authors: Rich Cohen
Categories: History
Named a Best Book of the Year by the San Francisco Chronicle and The Times-Picayune The fascinating untold tale of Samuel Zemurray, the self-made banana mogul w

Authors: Philip Sorgen
Categories: Biography & Autobiography
PHILIP SORGEN is not really dead--it’s just that since he received his poetic license he has been dying to use it. Philip has been an actuarial trainee at Met

Authors: Rich Cohen
Categories: Biography & Autobiography
Sweet and Low is the bittersweet, hilarious story of Ben Eisenstadt, who invented sugar packets and Sweet'N Low, and amassed the great fortune that would later

The Adventures of Herbie Cohen

Authors: Simon R. Green
Categories: Fiction
Owen Deathstalker doesn’t trust anyone, even his companions...especially his companions. But for the diplomatic mission to Mistworld, he’ll have to try. Rep