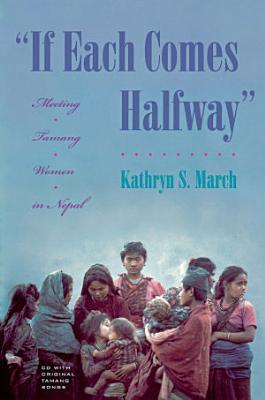 For twenty-five years, Kathryn S. March has collected the life stories of the women of a Buddhist Tamang farming community in Nepal. In "If Each Comes Halfway", she shows the process by which she and Tamang women reached across their cultural differences to find common ground. March allows the women's own words to paint a vivid portrait of their highland home. Because Tamang women frequently told their stories by singing poetic songs in the middle of their conversations with March, each book includes a CD of traditional songs not recorded elsewhere. Striking photographs of the Tamang people accent the book's written accounts and the CD's musical examples. In conversation and song, the Tamang open their sem—their "hearts-and-minds"—as they address a broad range of topics: life in extended households, women's property issues, wage employment and out-migration, sexism, and troubled relations with other ethnic groups. Young women reflect on uncertainties. Middle-aged women discuss obligations. Older women speak poignantly, and bluntly, about weariness and waiting to die. The goal of March's approach to ethnography is to place Tamang women in control of how their stories are told and allow an unusually intimate glimpse into their world.